skip to main | skip to sidebar

The Revelations trip was coming up in a matter of days and I had yet to get my massive cache from Dishwater. So, instead of studying for school finals, I decided to go pick it up and go climbing for the weekend.

This time, it was Ricardo Baranowski, his friend Paul and me who would be going out there. It was so warm on the hike out that we didn't even wear our shirts for much of the time. Once again, Kaupo and Nene accompanied us in and helped carry some weight.

One the first night we enjoyed a beautiful sunset followed by seemingly eternal alpenglow. These are the moments I think most define my passion for being in the mountains. You don't get views like this in the hustle-bustle city! 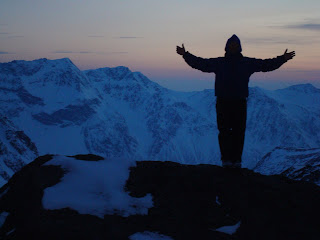 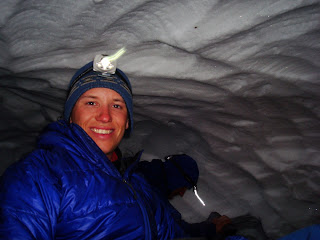 We got started early in the morning and hiked to the head of the cirque. There we found a narrow gash that appeared to lead to the summit of Nantina Point. Richard took the first lead up and over a short little rock step, then belayed Paul and me up. 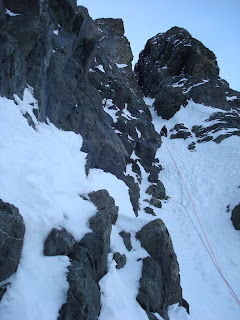 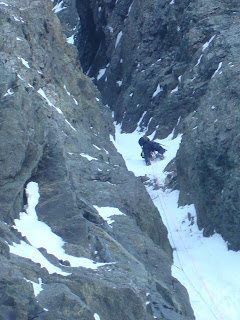 I got the next lead up the steepening gash and found incredibly unconsolidated snow over bad rock with little pro. When I was able to get a piece in, it was with really small gear, like a #00 C3 camalot or #3 stopper. 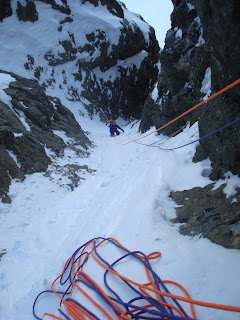 Leads were taking a while due to the poor snow conditions. Richard took the next lead over a short little snice and rock step, then across a really exposed and scary traverse to another couloir.

By this time, I realized that the route was going to take far longer than we had expected. I had class at 8:30 in the morning and still had to hike out. Too many days climbing had pissed off my teacher and I was out of absences. Still, we continued up as the sun fell lower in the sky. Sometimes it is hard to stop when the momentum is pushing upward. 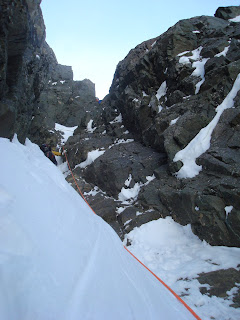 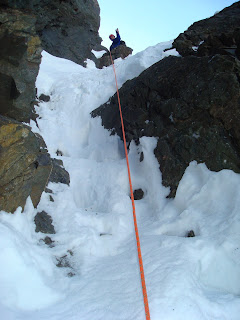 As we got higher, the summit seemed like it was so close. Pitch after pitch kept proving that it was farther than we had anticipated, yet we still climbed. A large chunk of simul-climbing ate up a lot of elevation in a short amount of time. The sun set as we neared the summit, and I realized I had forgotten my headlamp. I was pretty mad at myself for forgetting such a key piece of gear.

The last few pitches were devoid of gear placements. Paul and I were not at all motivated, but Richard was keen for the summit. He led all of the upper pitches including the last one. To break onto the summit Richard had to climb through a nasty cornice with almost no pro under him for an entire ropelength. 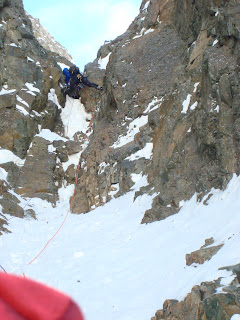 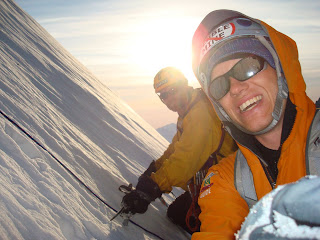 We pulled up on the summit just as the sun went down and didn't stay long. Paul and I were anxious to get down, and I still had to hike out. By this time, I knew I was cutting it close.

Paul coming up through the cornice 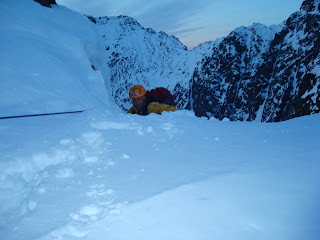 The look on my face says it all 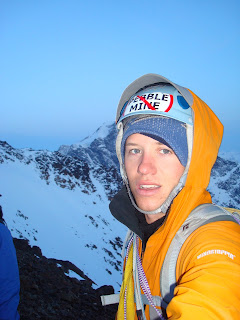 As we rappelled through the night, I realized there was no way we were going to be able to make it back in time for me to make my class at 8:30 in the morning. It was a chilly night and we all had our down parkas on as we descended in 200' chunks. Towards the bottom of the route we could see the boulder where our snowcave was. All of a sudden we saw what looked like a headlamp down there. It turns out Richard's girlfriend Natalia had hiked up to help carry some of my stuff down because I was going to be hiking down alone otherwise with a lot of gear. I thought that was super nice of her!

We finally got to camp at about 3:30 in the morning. I knew there was no way I could make it back in time, so I decided to just say "screw it" and passed out in the snow cave. In the morning Natalia and I hiked out under beautiful skies. 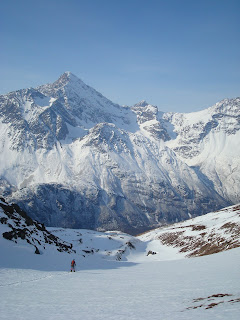 Despite my pleas, my professor showed me no sympathy and failed my ass for missing one too many classes. Needless to say I wasn't pleased. Oh well, I learned a lesson...Don't take 8:30 AM Monday classes.

Perhaps when I'm retaking the class again in the Fall I'll be able to decide if it was worth it just to make the first ascent of the north face of Nantina Point.
Posted by Clint Helander at 11:25 AM